Words have always held a fascination for me especially when they are used creatively.

Idioms are charming and give character to words when used correctly.
Some idioms are regional, and only locals understand them easily. There are popular, humorous and serious idioms and maybe we can use them more frequently to express thoughts uniquely?

A PENNY FOR YOUR THOUGHTS.
This is popular, and a way to ask what someone who is lost in thought, is thinking about.

ON YER BIKE.
This is regional and often a disrespectful way to tell someone to go away.

AL FRESCO
A way of saying “outside”
We ate al fresco under the olive trees.
This is quite a striking way to say ‘we ate outside’. Yes?

AN AMBULANCE CHASER
A lawyer who finds work by persuading people that are injured in an accident to ask for money from the people who caused the injury is an ambulance chaser.
John makes a lot of money out of other people’s misfortunes. He is a notorious ambulance chaser.

BALLPARK
A way of giving cost estimates.
Can you give me a ballpark figure for the cost of this project?

Be aware though. Some idioms have become so cliché in use.

Can you guess the meaning of the idioms below?

OUT OF THE ARK 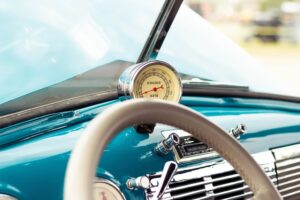 Grandma’s hat was straight out of the ark.

What do you call a person who uses a lot of idioms? Idiom hound?